If your looking for a cultural experience coupled with an iconic climb or trek, don’t worry Mountain Gurus has you covered. There are so many places to visit and so many peaks to climb! Finding which trip is best for you is sometimes hard, but our team has put together a list of great adventures for the beginner. Below are the Top 5 International Bucket List Climbs.

The most iconic and sacred of the Japanese mountains, Mount Fuji rises 12,389 ft above the surrounding landscape, this mountain has been the source of inspiration for artists, writers, and climbers for centuries. Visiting Japan would be incomplete without a view of this spectacular mountain. The most popular time to climb is during the summer months, and can be ascended over a few days or in one day for those in shape.

Photo: Hikers waiting for the arrival of light on Mount Fuji.

Europe’s highest mountain, Mount Elbrus is located in the heart of the Caucasus Mountains in Russia. It is one of the famous Seven Summits. The mountain has two summits, its higher western summit stands at 18,510 ft and the eastern summit slightly lower. Little known outside of Eastern Europe, the peaks, glaciers and valleys of the Caucasus are as beautiful as the Swiss Alps. The route ascends gentle snow slopes to a saddle between the two summits and gains over 4,000 feet before reaching the western summit. Although the climb requires no previous climbing experience the ascent is long requiring good physical conditioning and the use of crampons and ice axe. 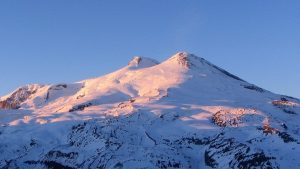 Mount Kilimanjaro – Rising high above the African plain with its snow capped summit is truly an awe-inspiring adventure. Celebrated as the “The Roof of Africa“ and the least technical climb of the Seven Summits – makes Kilimanjaro an ideal first expedition for aspiring climbers and outdoor enthusiasts alike. The Machame route to Uhuru Peak, also known as Kibo’s summit, is considered by many climbers the most scenic route on the mountain. The route traverses from the Shira Plateau Western breach and Lava Tower to the Barranco Wall and under the mountains southern glaciers. After the climb many elect to do a safari in the world renowned Ngorongoro Crater and Serengeti National Park. 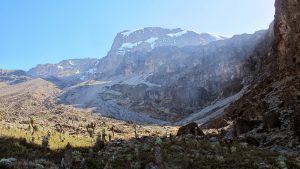 Photo: View of Kilimanjaro from the Barranco Wall.

The Mexican Volcanoes offer an excellent introduction into the world of high altitude mountaineering. Snowcapped Pico de Orizaba at 18,490 ft is the highest mountain in Mexico and the third highest in North America. Locally known as Citlaltépetl (Mountain of the Star). This mountain, while not technical, is interesting and offers straight forward glacier climbing at moderately high altitudes. After climbing Mount Rainer, Mount Baker, or other Northwest peaks the Mexico Volcanoes are a great next step for those seeking to expand their international mountaineering experience. Did we mention the food is phenomenal? 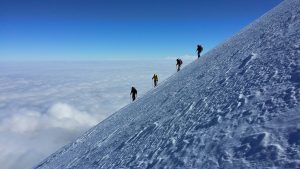 Photo: Descending from the summit of Pico de Orizaba.

Though technically not a climb, the journey from Kathmandu to Everest Base Camp is a must do for any world explorer. Trekking through this region of Nepal you will see numerous 8000 and 7000 meter peaks including Ama Dablam, Lhotse, and of course Mount Everest. Due to the high altitude of the region treks typically take 21 days to complete. This allows for amble acclimatization. Those feeling extra adventurous can spend a night at Everest Base Camp, or tack on a climb of Lobuche Peak. 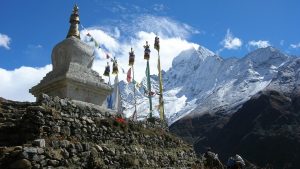 Photo: A Buddhist shrine on the trail to Everest Base Camp.