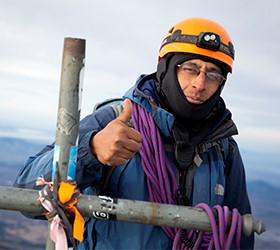 Emilio has climbed and guided throughout Mexico and Latin America for two decades. Originally from the Mexico City area, he has climbed el Pico de Orizaba, Iztaccíhuatl, and Mexico’s other famous volcanoes many times. He has climbed in Ecuador, Peru’s Cordillera Blanca, and he has led some of the first Mexican climbing, sea kayaking and trekking expeditions into the rugged Aysen region of Chilean Patagonia. Emilio has served as one of the directors of the Mexican Mountain Guides Association. When he’s not guiding in Mexico, he manages his backcountry retreat in Patagonia.